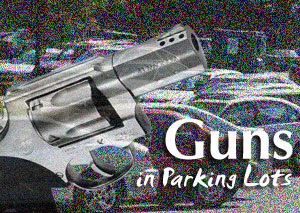 I know we all wanted to take some time and celebrate last week’s victory in the U.S House, but it seems the gun lobby had other plans. Later today, when the PA House returns to Harrisburg, there will be a vote on a bill about drivers’ license exams. Why does that matter? Because there is an amendment to that bill that prohibits employers from banning guns in their parking lots. That means that an employer who doesn’t allow firearms to be carried into its premises, and who had extended that rule to cover all its property, including the parking lot, would have to change its rules.

Simply put, this is an effort to make it so that gun owners can bring their guns wherever they want, whenever they want. And parking lots will only be the first step. Next, they’ll be trying to tell employers that they can’t prohibit firearms inside their businesses. And then churches.

You know what’s going on here. They want to change the law to be anyone, any gun, anywhere, any time. We won’t let that happen.

Email or call your state rep. RIGHT NOW and tell them to vote no on the Harhai amendment (A06922) to HB 1159 and while you’re at it, ask why this amendment is even allowed to be considered as part of a bill about drivers’ license exams.