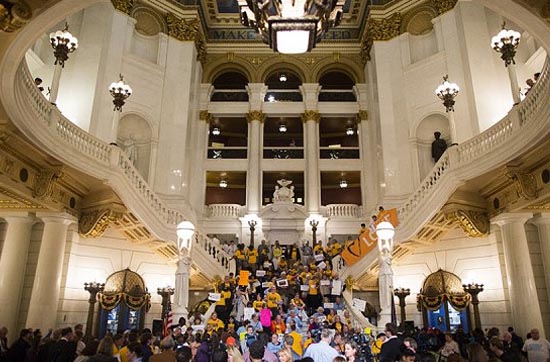 CeaseFirePA Statement on Senate Passage of 383 Allowing Guns in Schools

Philadelphia, June 29, 2017 — CeaseFirePA is disappointed that the Pennsylvania Senate yesterday voted to approve Senate Bill 383 which would empower local school districts to allow teachers and other nonsecurity personnel to carry guns in school during the school day. This is a dangerous and misguided bill that will not make our schools safer.  Students, teachers, parents, and even two PA State Government Task Forces have concluded that arming teachers is not the way to make our schools safer.

Despite this evidence and a moving letter from Sandy Hook teachers who survived the Dec. 14, 2012 tragedy, 28 Senators voted in favor of the bill.  However, 22 Senators voted No, 14 Democrats and 8 Republicans, including some who had voted for the bill in committee.  The efforts and outreach of Pennsylvanians from across the Commonwealth made a real difference.  The Governor has pledged to veto this bill if it reaches his desk, and this vote demonstrates that veto will be sustained.

Pennsylvania should be ashamed that rather than work on our real problems — including gun violence, underfunded schools, and a looming budget deadline — the Senate spent time finding a way to put guns in our public schools. CeaseFirePA Executive Director Shira Goodman pledged, “We will do everything we can to keep guns out of our schools and keep our kids and teachers safe.”

The vote count can be found here.