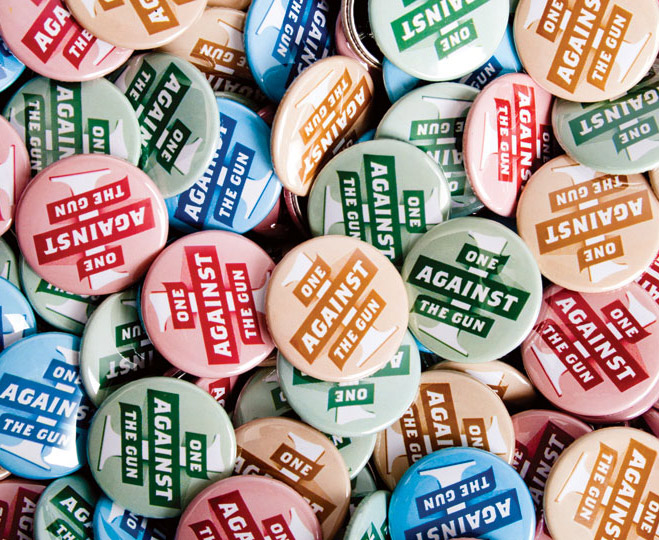 The new issue of Philadelphia Magazine includes an article by Sandy Hingston called “One Against the Gun,” which outlines her new campaign to have those who oppose gun violence and want commonsense gun laws to wear pins proclaiming “One Against the Gun.” Hingston is frustrated by the seeming lack of progress on changing federal laws since Sandy Hook but also makes the case that things are changing.  She quotes CeaseFirePA on this score: “‘We’re finding that the silent majority isn’t so silent anymore. People need to realize, we are making progress. Even in Pennsylvania.’”

Hingston believes in that majority, and she believes that smart, sane, patriotic, commonsense appreciating Americans will join her in working for better policies.  She knows it’s a message that needs to get to the politicians, though: “I have this image in my mind of a candidate for Congress shaking a long line of hands at a meet-and-greet—and everyone attached to those hands has on a pin that says “One Against the Gun. . . .  In every line of 100 folks waiting to shake the hand of a politician, 99 don’t belong to the NRA. Why don’t we tell the politicians that?”  Hingston closes with this prediction by CeaseFirePA’s Shira Goodman, “‘In the 2014 races. . . .people are going to have to get on the record and say where they stand’ on the issue of commonsense gun violence prevention policies.

Hingston is giving her pins away to those who write in, and she offers this explanation of her campaign: “So maybe I’ll be the only “One Against the Gun” pin-wearer, and this box of them will sit in my office forever. That’s okay. I don’t mind looking foolish or naive if there’s any chance at all it could spare one parent a lifetime of grief, and the future of one child.”  She’s right and we all should be doing everything we can to work towards that goal. Whether it’s wearing a pin, signing a petition, visiting your legislator or bringing a friend to a vigil or rally, there’s a way to get involved. Please, join us. Take our pledge today.