Outside The Bell Tower in ’66 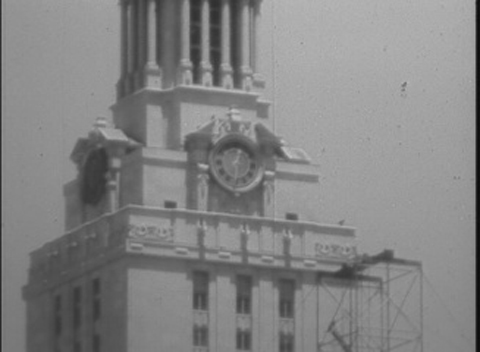 I was a graduate student at the University of Texas School of Library Science in 1966. My four year old son was at home with a baby sitter the morning of August 1st.. The library was in the building with the clock tower; I had been there working on an assignment. Suddenly I heard what I thought were folding chairs being slammed against the floor above. Seemed strange, but of no significance to me.

I left the library before noon, to get home to my son. When I got to the door of the building, there were a number of people standing there. No one was being told not to leave the building, but somehow my instincts made me ask why they were gathered like that. Someone answered that they thought someone was up on the tower, shooting at people on campus.

I went back up the steps to the library, and looked out the window. There I saw people being shot, and falling on the ground. There was one man on the ground wearing a black suit. My husband had worn a black suit that day, and he was due to be on campus for a 1:00 class. I went back down the steps to the pay phone, and called the house. The babysitter answered; she said my son was fine and playing happily. I didn’t have to hurry home.

I kept running upstairs to the library window, and then downstairs to call home. Back and forth. Eventually, it occurred to me that I was all alone. The library was empty; the halls were empty; no one else was using the phone. After this was all over, I learned that people had found hiding places, often in the restroom stalls. It never occurred to me to hide.

Thankfully, my husband was not the man in the black suit; he had heard on the radio about the shooting and had gone to the hospitals to see if I was there. . We knew only one family personally who lost a loved one, but it felt as if it had been a personal loss. The pain of that day is still with me, fifty years later. Every time there is another mass shooting, I wonder why no one ever mentions the tragedy of what happened that day in Austin. Now, at the 50th anniversary, it is being remembered and its memory is being tarnished by allowing students to carry guns on campus.

Hopefully, these horrific events will stop; but professionals will always be the best suited to deal with these types of situations. A student with a gun could not have stopped the shooting, they would have only made it worse.