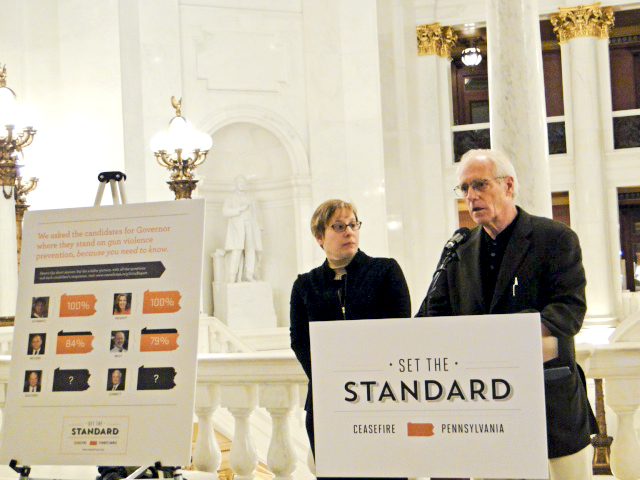 Standing in front of the Lieutenant Governor’s office in Harrisburg, Ceasefire Pennsylvania executive director Shira Goodman and board vice president Phil Goldsmith announced the release of the quadrennial report on the gubernatorial candidates’ stances on vital gun-violence prevention measures.

The questionnaire set forth nineteen gun violence prevention policy measures and asked the candidates to either support or oppose each measure. The issues ranged from expanding background checks to mandatory reporting of a lost or stolen firearm within a reasonable amount of time. The policy measures, an assessment of the responses and the verbatim responses are provided in a full report entitled, “Where Do the Candidates Stand on Gun Violence Protection? A Voter’s Guide to the 2014 Gubernatorial Election.”

Mr. Goldsmith noted that the organization had released a similar report during the 2010 election, and that he believes “…it is an important thing to do. There was a time when candidates did not talk about this issue.” Referring to the non-responses sent in from Guzzardi and Corbett, Mr. Goldsmith expressed disappointment, telling the assemblage that silence on the issue, ”…cheats the public of their understanding [of the candidates’ stances].”

Ms. Goodman acknowledged,” Pennsylvania is a unique state…We have very high gun-ownership…but also, 90% of Pennsylvanians, including gun owners, support expanded background checks.” She also agreed with Mr. Goldsmith on his assessment of the importance of the topic to the upcoming election, saying that, “I don’t think we’re going to get through the next few months without this becoming a major issue.”

Coverage of the release can be found here, here, and here.