That’s Not How the Song Goes

You know what drives me crazy? When other people try to tell us what it means to be American or what’s the real America. The whole point of our great country is that we define that for ourselves! And it’s worse when people wrap themselves in the flag and the founding fathers and our great constitution to tell us we’re not American enough.

So, imagine how upset I was when I saw this billboard in our capitol city, Harrisburg, a city that is suffering a horrendous toll of gun violence, especially against young people. 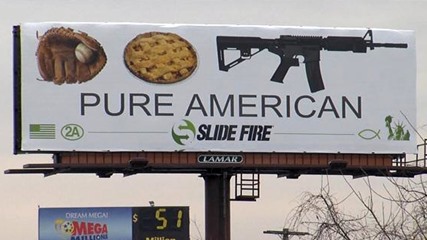 Baseball, apple pie, and assault rifles? That’s not how the song goes! This is offensive. There’s no other word. Billboards like this are popping up in cities across the U.S. and Lamar Advertising should be ashamed. And let’s be clear, this is not a First Amendment free speech issue. This is commercial speech, that the advertiser paid for, and that Lamar took money for. Unlike the government, private businesses like Lamar can and do make distinctions based on the content of speech.

So, if you agree that we shouldn’t be having assault rifles thrust into our faces with the message that it’s “pure american” and that gun manufacturers and advertisers shouldn’t be defining what’s American, join us in sending a message to Lamar advertising.