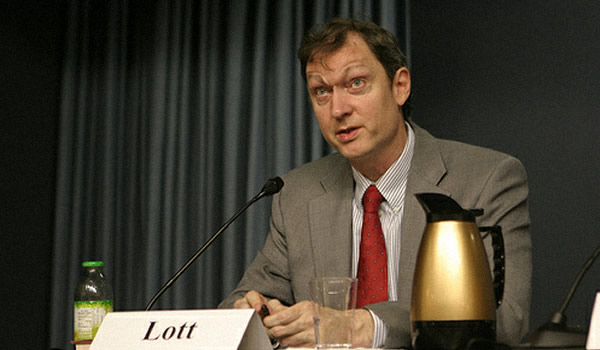 HARRISBURG, May 22, 2017 — CeaseFirePA is disappointed that the House State Government Committee gave a platform today to John Lott to testify about “gun free zones.”  Mr. Lott — along with his research and conclusions — has consistently been discredited.  No one with a countervailing position was invited to present testimony different from or critical of Mr. Lott’s.  This represents a serious disservice to the Committee, the House and the public.

Mr. Lott typically claims (1) that more guns lead to less crime and (2) “gun free zones” are targets and represent the vast majority of mass shooting sites. These conclusions, the data supposedly relied upon to reach them, his research methods, and Mr. Lott himself have been discredited by multiple sources.

For example, the Journal of the American Medical Association, Internal Medicine, has demonstrated that stronger state gun laws actually correlate with lower rates of gun deaths.[1] The finding applies both to suicides and homicides: Louisiana, which was among the five states with the weakest gun laws saw 7.8 suicides and 10.1 homicides per 100,000 people over the period studied, while Massachusetts, which had the strongest gun laws in the U.S., had just 1.7 suicides and 1.7 homicides per 100,000 people.[2]  Research from the Center for American Progress confirms these findings.[3]

Moreover, significant questions have been raised about Mr. Lott’s data, his econometrics models, and his conclusions.[4]  An extensive study by Armed with Reason reveals Mr. Lott’s unsuccessful attempts to defend his oft-repeated claim that “98% of defensive gun uses require only the mere brandishing the gun with no shots fired.”[5]  Upon questioning, Mr. Lott cites different sources for his data, and when unable to produce the data underlying the study he claims to have conducted himself, he has offered academically unacceptable excuses, including that all of his data was lost in a computer crash and that no receipts were kept for any expenses incurred in the study.[6]

Mr. Lott relies on his claims about gun free zones to support more robust “right to carry laws,” but a 2002 study[9] found no evidence that right to carry laws lead to reductions in mass shootings; and a 2014 FBI study[10] of 160 active shooting events found only one was stopped by a concealed carry holder as compared with four by armed guards, 2 by off-duty police officers and 21 by unarmed civilians.[11]

It is irresponsible for the Committee  to have invited Mr. Lott to testify as an expert, without affording others the opportunity to challenge the testimony or present countervailing evidence and data.  More disturbing is the fact that the Committee has wasted valuable time on this “informational hearing” at a time when bills that seek to make our Commonwealth safer receive no hearings, debate or votes from our legislators.

CeaseFirePA urges our lawmakers to do better for their constituents and the broader public.  The resources and time wasted today would be better spent working on making Pennsylvania safer.  We also urge that there be a public accounting for how Mr. Lott’s expenses and time were compensated.  Public funds should not be expended on this charade.

[3] Arkadi Gerney, Chelsea Parsons, and Charles Posner, America Under the Gun: A 50-State Analysis of Gun Violence and Its Link to Weak State Gun Laws, April 2013.