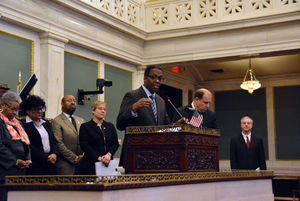 We hope you had a meaningful Veterans Day and have had a chance to recharge from the election. CeaseFire Pennsylvania’s endorsed Candidate Tom Wolf won election as Governor, making him the first challenger to unseat an incumbent Governor in modern PA history. Even after the NRA poured millions of dollars into the election and attacked Wolf for his answers to our questionnaire, voters chose the candidate who stood up for common sense gun policies.

Election night was actually quite a success for the Gun Violence Prevention movement. For a full roundup of our election night successes check out the Atlantic’s coverage.

On Monday, we stood with several lawmakers and mayors to announce the filing of a lawsuit challenging the constitutionality of Act 192, the special standing/preemption bill. Your advocacy pushed the gun lobby into a corner and forced them to use unconstitutional procedures to get their special legislation passed. And now we’re going to do all we can to overturn this law. We’ve said all along that bad policies and bad procedures make bad law. Here’s a link to a recent CeaseFirePA oped about the law, and some coverage of the lawsuit.

We’re going to keep fighting for a better PA. Thanks for standing with us.